This article describes functions and common usage techniques for the Automixer control block for Audia and Nexia products.

For more information about automixers on the Tesira platform, please check out Gain Sharing vs. Gating Automixers. Typically Automixers should only be used for installations with multiple microphones.

Let's look at some potential issues with a system without an Automixer:

The Automixer is designed to combat these common issues. In a system with an Automixer, you can realize these benefits: The Adaptive Threshold Sensing (ATS) method refers to the decision making process of the microphone’s state. The ability to discriminate the ambient noise from the beneficial signal (i.e. voice of speaker) is based on constant scanning of the input channels for the highest RMS level. The algorithm is said to be “adaptive” as it dynamically adjusts its threshold depending on the overall ambient noise floor. This explanation hopefully highlights how much proper gain structure matters to the performance of the algorithm. The usage of levelers is strongly recommended on the input side to provide consistent signal to the Automixer.

A simple statement rules the NOM attenuation process.“Attenuate by 3dB for every doubling of the Number of Open Microphones”
It translates to the following mathematical formula: NOM attenuation = 10log(NOM)

Let’s use a couple of examples to better illustrate the NOM attenuation:

Once the limit of 8 active microphones is reached (9dB Attenuation), the NOM count and attenuation maximum is reached and will not increase further. (Hopefully, the 8 persons trying to talk at once will have figured out the same by then…) If more mics are present the NOM process will always limit the number of open mics to 8.

The concept of Mix Minus relates to a common technique for optimizing gain before feedback in voice lift application (microphones locally reinforced).

In a Mix Minus design, microphones are attenuated, or simply not routed, to the ceiling speaker zones nearby.

The simplified diagram shown is an illustration of such system, where Mic #1 is only routed to ceiling speaker Zone #2 and inversely for Mic#2. With this configuration, we increased the direct microphone to speaker distance therefore decreasing the potential for feedback. An Automixer with enabled direct outputs is a perfect match for creating Mix Minus designs.

Activate it either from the Automixer block’s initialization dialog box or via right click + Edit Block Parameters. Mic Options are available from the Automixer dialog box and include settings for:

Designated Mic ON / Last Mic Hold: Use this setting to decide which microphone channel will remain ON when no signal is present at any input. (Default setting is None)

Open Mic Limits: An Open Mic limit may be set by the designer to control the maximum NOM. Warning: Setting this value must be done with care as it might impact on the Automixer’s performance.

Channel Settings affects individual channel settings, but may be applied to all channels by choosing the "Set All" option. Per channel settings are available to the programmer by right clicking on the Mix bus cross-point.

Within the Channel Settings dialog box, the following options are available: The logic outputs on an auto mixer provide feedback for when an input channel is gated on or off.

System designers might want a visual indication of the state of the microphone (Open / Attenuated).

By enabling logic outputs on the Automixer (feature available from the block’s initialization dialog box), logic outputs could, for example, follow the state of the microphone: Open = 1 (high)  and Attenuated = 0 (low). Simply connecting the Logic outputs to a VCB / Logic Box driving an LED will provide visual indication on whether the microphone is Open or Attenuated. Integrating camera tracking to your design is only a couple of clicks away with the help of the Automixer’s logic outputs and the command string blocks.

In this example, connecting the logic outputs to the command string block will trigger a command to be sent to a camera or camera controller, so that the camera can pan to the active microphone location. The addition of Logic Delay blocks can improve this functionality and provide smoother behavior, for example, a mic would have to stay active for a set period of time before the camera moves to the set position.

Audia/Nexia systems offer one way of signaling or triggering cameras: Camera Control Logic
The Automixer Logic outputs are triggered high when a microphone is activated, and this 'High' signal is used to trigger the appropriate channel on the command string block.
A Logic Delay block is provided to introduce appropriate time delay to smooth out the Camera response. A spurious signal from the microphones (coughing, knock on mic or other nearby sounds) can falsely trigger a camera, so it's important to ensure that only signals which remain active for a certain amount of time actually triggers a camera preset.

Trial and error is the best way to figure out the right logic delay value for smooth camera response. For example, setting the ON time to 2000 ms (2 seconds) will ensure that only microphones that remain active for 2 seconds or longer will trigger a command string. If no microphone is active, the 'Reset to Main Camera' NAND Gate in the logic circuit will trigger the room camera for the default room view.

There is 1 serial port available on each Audia, Nexia, or TesiraFORTE device and 2 serial ports on each TesiraSERVER-IO device, allowing a direct connection for 1 or 2 cameras. With a direct connection, the serial command string block needs to be assigned to the unit where the camera its controlling is connected. 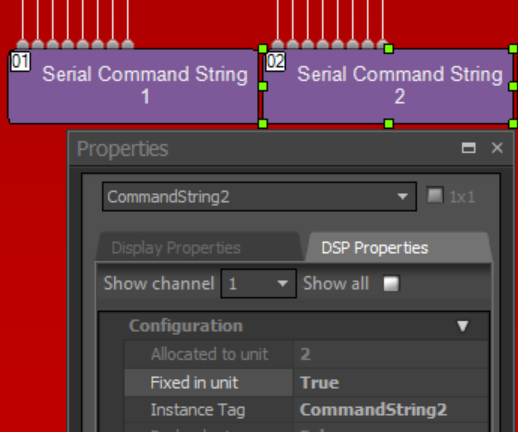 Please check out our System Design Template - Conference room with AEC and automatic camera control for an example of camera control with a Tesira DSP.