Partitions are a very powerful feature that can make implementation and management of large installed audio and/or video systems easier. This feature allows Tesira systems to be easily used in systems that span multiple rooms, applications that require a very large number of inputs and outputs, or large commercial buildings or campuses with many zones. Partitions also allow integrating and managing audio and video in a single Tesira configuration.

Partitions allow a Tesira system to be divided into independent audio and video sub-systems. Each partition is displayed on a separate tab in the Tesira software and configures a separate group of I/O and DSP resources in the system itself. One or more partitions can even be updated with a new configuration without interrupting the audio or video being processed in other active partitions.

When creating a new configuration, the software asks for Partition Type with choice of 'Audio', 'Video (10G network) and 'Video (1G network)'. Partitions appear as additional tabs just above the workspace. The three partition types have different default background color to easily identify them. It's easy to rearrange the default tab order by clicking and dragging a partition tab to another position.

Up to 32 partitions can be added in a Tesira system. Note that at compilation, every partition must contain a valid audio or video path. An empty partition or one with an incomplete A/V path will result in a compiler error.

The other buttons in the standard toolbar related to Partitions are 'Open', 'Close', 'Delete' and 'Rename'. These functions can also be accessed through the System menu, under Partitions. It is possible to hide partitions from view by hitting the 'Close' button or the 'x' on the tab.

A designer decides how best a system should be split into partitions. Some of the common ways of implementing partitions are:

A simple example would be a room combine/divide situation. The system could be divided into Partitions 'Room 1' and 'Room 2', affording the independence that separate systems for each room might offer, yet they would remain linked in a single configuration file.  Within each partition, the configuration can be built as if each room were a stand-alone system.
This way, Partitions Room 1 and Room 2 could be completely independent and, when required, share audio, video and logic signals using Partition connectors.

Partitions can share AV streams, audio and logic signals by means of Partition Connectors, which can be found in the 'Specialty' section of the Video and Audio Object toolbar. The connector options are different for Video and Audio partitions. Here is a brief description of the Audio Partition connector types:

The control dialog of a PCRx Audio block shows the number of assignable channels of the block in the left pane and the available transmitter ports across all other partitions in the right pane. Each channel of the PCRx Audio block needs to be assigned manually by clicking the receive channel first (1) and a transmitter channel next (2). Here is a brief description of Video Partition Connector types:

To get an overall view of the system with all its partitions, the System View tab displays all partitions as blocks and shows if a partition is sending or receiving audio from other partition(s). The view is accessed from the View menu→Docking Windows→System View, or by clicking the highlighted button on the Layout toolbar: Double clicking a partition block will open that partition. In systems with several partitions, this allows for quick navigation. Using a signal path identifier on a signal that might flow to other partitions in the main view will also show with a red highlight in the System Navigation view.

For a system with phased installations, a file with a partition-based approach offers unique advantages. If a certain area is ready for installation, it can be programmed within a partition and the system commissioned partially. As more areas become available for commissioning, partitions can be added later without affecting existing partitions or causing unnecessary downtime.

When sending an updated configuration file to a Tesira system, only the partitions that have been modified since the last update will be affected.  Partitions that haven't been changed since the last update will not lose audio or video functionality during the configuration update.  Therefore, it's important to avoid modifying partitions unnecessarily. In some cases, recompiling a partition (even when nothing else has changed) will modify the partition and require it to be updated next time the configuration is sent to the system.

The software offers three ways of compiling a file, to ensure you only compile the partitions you need to compile. The following three options are available in the System menu→Compilation:
1. Compile Active Partition: Only compiles the partition in view
2. Compile All Uncompiled Partitions: Compiles all uncompiled partitions in a numerical order
3. Recompile All Partitions: Compiles all partitions, even if they are already compiled

Option 1 and 2 are particularly useful when a small change is made to one or more (but not all) partitions. This feature can save time during compilation as a large file may take some time to compile. Those options will also not modify partitions that haven't been changed since the last compilation.

GREEN status indicates that a partition will not be affected in any way during configuration upload.

YELLOW status indicates that some changes have been made to the partition but the update is optional. Changes include mute state, cross-point state within a mixer, level changes, IP address or VoIP settings changes, etc. In these cases, the "Update Configuration" checkbox needs to be manually checked for the partition to update. If not checked, the partition will not be updated.

On clicking Send Update, the file is uploaded and the "Manage Partition Media" dialog displays media controls for affected partitions: 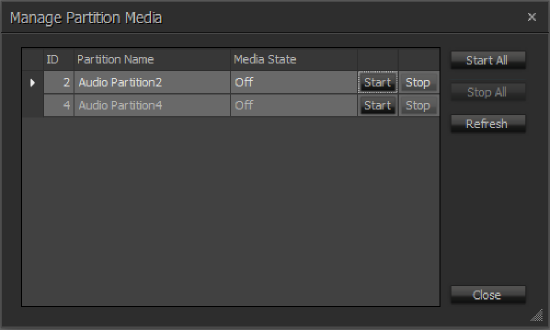 The screenshots above are from a 3-room Tesira system wherein each room has its own partition with an additional partition for Video. A programmer can modify and test configuration or even commission a room while other rooms are in use. As shown above, the compiler makes sure that any partition that  has not been modified is unaffected. Likewise, the Tesira system ensures that those partitions are not interrupted during a 'send configuration'.

In this example, Partition 1 has a green status in the Update System Configuration window because it has not been modified in any way, and for Partition 3 with the yellow status for the optional update, the 'Update Configuration' option is not checked. When the configuration is updated, the Manage Partition Audio only shows options for Partitions 2 and 4. Partition 1 and 3 audio remain uninterrupted through these actions.

When hitting the "Compile All' button, Partitions are compiled in a numerical order. Each partition is considered as a separate entity and optimized for processing and I/O allocations. While not usually critical, changing the order in which Partitions are compiled might prove useful in some situations. This can be changed in the software under  System→Compilation→Set Partition Compilation Order.

In the same menu, there is also "Perform Global Optimization". This option can be selected after all partitions are successfully compiled.  It will analyze the compilation results to find an equivalent, lower-cost equipment allocation, if one exists. This is particularly useful when a Tesira configuration is being built at the system design stage, and the most economical solution to run the configuration is desired.

DSP Resource Usage Per Partition (Audio Partitions Only)
The Compile Status of all the Audio partitions can be viewed in the DSP Resources view accessed from the Layout Toolbar via button pointed out: This view shows the DSP usage estimate for both TesiraFORTÉ and DSP-2 card (for Tesira Server) per Audio partition. The check mark denotes the compilation status of the partition. In the image above, Partition P03 needs compilation and P02 will consume 7% of a TesiraFORTÉ's DSP resources.