You can use a Wake-on-LAN (WOL) function to turn on a unit (Usually a stationary PC) connected to the network. The WOL standard gives you two ways to wake the computer: Magic packet or pattern match. Check that the NIC (Network Interface Card) and the method you want to use to wake the computer are compatible.

The computer you want to start must have an Ethernet port (NIC) that supports WOL. If your computer has an onboard NIC, you can probably enable the WOL function in the Power Management section of the BIOS utility. On many systems, the WOL function is enabled by default. If you do not find anything in the BIOS related to WOL, chances are the onboard NIC does not support WOL. To use WOL you will need to get a new NIC that supports it.

Next, you need to tell Windows that it is okay to start the computer using WOL. This is done from the Windows Device Manager (Control Panel > System and Security > Device Manager). Find your network interface card and right click and select "properties". Select the tab “Power Management” and click “Allow this device to wake the computer”. Check under the tab “Advanced” that the “Wake-on-LAN Triggers” are enabled. 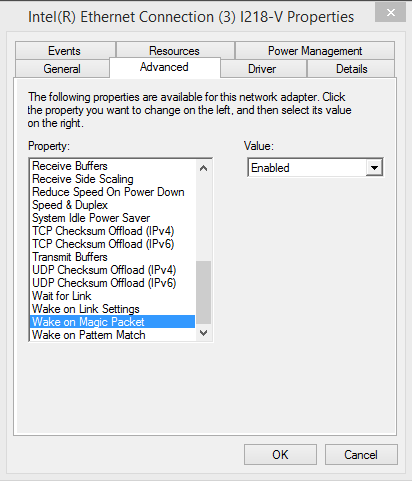 The WOL function uses a UDP broadcast to turn on the computer. As mentioned in the UDP section, UDP broadcasts are not guaranteed to reach the receiver.

When troubleshooting, place the two computers as close to each other as possible, minimizing the number of switches and hubs through which the data must pass. Moreover, WOL will work best if it is sent directly through the LAN without passing through the router or over Wi-Fi. Using a “WOL sniffer” program, you can see whether or not the magic packet has been received by the computer.