The Pendant mount is an accessory used to install Qt Active or Standard Emitters in an open or raised ceiling space and suspend them at the optimum height for best coverage.

The mount ceiling box cover is designed for use with a standard 4” octagonal electrical ceiling box at the suspension point. The electrical box and the emitter are not included in the pendant mount package and must be purchased separately.

The included cable is 20 feet (6 meters) long and is specially selected to suspend the mount while providing the necessary connections to the emitter. The ceiling box cover attaches to a 4” octagonal ceiling box and includes a connector PCB for all connections. The cover design matches the pendant mount and includes an opening for the assembled cable clamp, nut, and cable.

The cable assembly is pre-assembled with a cable clamp and nut that inserts into the pendant mount top.

The pendant mount end has an RJ45 connector and the ceiling box end is not terminated. The included cable is 20 feet (6 meters) long and can be trimmed to length.

The pendant mount system provides a single cable connection from the pendant emitter to the emitter string run. The ceiling box cover connector PCB provides RJ45 jacks for the string run input and the run output as well as an RJ45 jack and  three-terminal screw connector for the included pendant cable. Either can be used. The string input connector is set at a slight angle to allow for easier identification.

Note that the length of the pendant cable should not be included in the maximum cable run length calculation.

Identify the locations for the emitters and install the ceiling boxes. Run the string Ethernet cables between the boxes and secure as necessary. Be sure to test any field-terminated cables prior to installation. Troubleshooting mis-wired cables after installation is extremely difficult.

Conduit connectors can be used with both the cover and pendant top. The connector is used in place of the cable clamp and nuts, and will fit in the opening provided.

When installing multiple pendant mounts, unpack the cables and trim one to length as a prototype. Finish and install one mount to test the length. After the length is confirmed, the remaining cables can be trimmed.

Trim the cable jacket back 1 inch. The blue/white wire is not used and can be trimmed off. Strip the remaining wires by 1/4 inch.

If using an RJ45 connector, assemble using the following connections:

Slide the end of the cable with the RJ45 connector through the pendant mount top and cylinder assembly (see Figure 1). Attach clamp and nut to cable, leaving about 6 to 7 inches between the clamp/nut assembly and the RJ45 connector (see Figure 2). Pass the remainder of the cable through the top and pull the clamp up into the pendant top. Align the slot in the top opening with the hinge on the clamp. Pull it into the top until it clicks. Then pass the three-terminal plug through the ceiling box cover so the PCB is away from the pendant mount (see Figure 3). 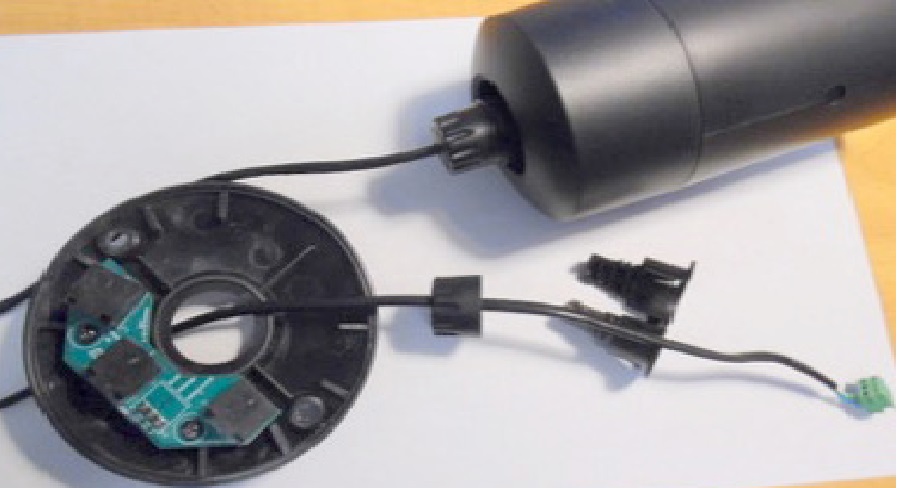 Align the clamp into the cover and pull it through until it clicks into place. Plug the cable into the “TO PENDANT” jack on the PCB (see Figure 4) if you are using an RJ45 connection. If you’re using the three terminal connector reattach it to the board. Dress the cables into the ceiling box and use the included screws to secure the cover to the box.