Qt X hardware changes the topology of how a sound masking system can be designed. This article helps to explain this in more detail and to outline how this topology differs from the way zoning was handled in Qt Pro hardware.

In Qt Pro hardware, zone assignment was tied directly to the physical outputs of devices. Zone controls were handled on a 1-to-1 basis, and any level adjustment that was done via web UI or front panel would follow its receiving zone. If two zones were in a common space, the level would need to be matched on each output to allow for uniform coverage.

The need for either direct vs. indirect speaker coverage or more zone management of a larger system created complications with this topology. Physical zone assignment required different controllers to be used as well as the need for multiple points of control.

In Qt X hardware, a zone is a grouping of outputs under a common control hierarchy. This allows for zoning to cross physical barriers allowing for systems to grow larger in scale while remaining manageable. When programming, the virtualized zones can be as simple as one zone covering all outputs of a controller, or as complex as zoning across multiple networked controllers that are located across different architectural zones. All outputs that are assigned in a zone can have a single masking, background music, and paging level that allows for one point of contact for adjustments.

In the Qt X example above, the physical outputs are reversed from the actual zone names. This would not be possible in a Qt Pro hardware setup. While not a practical application, it highlights that Qt X hardware eliminates the need to correlate physical connections to cable runs.

Within a zone, the user has level controls that include all grouped outputs with the selection of background audio along with any sources. Zone grouping also allows for paging inputs to be assigned to zones in a space. These levels for zones will be displayed on the front panel of the controller. Levels for masking, music, and paging along with EQ adjustments are available on a per-output basis. These changes allow for fine-tuning of outputs to match the space. In some applications, masking may need an output volume or EQ adjustment on a string of emitters but still be tied to the master control for the zone. The output settings window would be where these adjustments can be made.

The layout below represents the way the Qt X controller above would look while programming within the Qt X software application. A change in level or background audio assignment to Zone 1 would take place across any of the outputs that were part of that zone.

In this example, a Qt X 600 with all physical outputs in use could be set up as a single-zone configuration for ease of control. In an application like a large open area office. This type of layout is not limited to a single controller as this is a scalable design. This would allow for one masking level from the front panel to adjust masking to all emitter output strings. In the same way, as a single zone could be set up to share all outputs, multiple zones could be shared across networked Qt X hardware to allow for grouping to cross physical controller locations. This allows for the creation of architectural zones across a large system that shares multiple control processors but has outputs groups logically by the space they are serving. In the following example, a multi-controller Qt X configuration is shown with the zone layout view as seen in Qt X software. 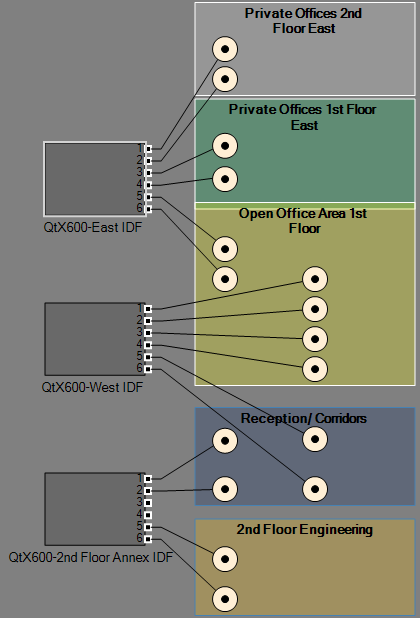 In this example resources are available to share across all controllers, and all front panels display zones for adjustment regardless of location.

A string of loudspeakers is generally defined as a group of emitters or speakers that follow a daisy chain topology. In Qt Pro systems this would typically be referring to runs of active or passive emitters that we tied to a controller via a home run for each output. In a Dynasound system, a string of loudspeakers would be referring to a distributed high-impedance group of speakers using 70/100V. The Qt X platform brings both these methods of daisy chaining loudspeakers into one platform. The below examples define the types of loudspeaker strings that would be used with each controller type.

Both the Qt Standard and Qt Active Emitters may be used on the same sound masking project with signals supplied by a single Qt X Controller if they are assigned to different outputs.

Strings of loudspeakers are set up in Qt X software by creating the required zones for the project and adding emitters to represent each speaker run. Outputs of each controller can then be associated with a zone by connection to the added emitters in the zone.

This allows for no background or paging to be routed to the zones that do not support that type of signal. Zone 2 can have logic assigned to enable push-to-talk paging to reach Zone 2. Masking music and paging level can then be controlled from the software, web UI, or front panel for each created zone.

Individually controlled loudspeakers can be defined as a speaker per output type topology. This allows for multiple speaker types to be connected to a common Qt X controller and zoned as required while still allowing for a unique masking spectrum to be tuned per output. This allows for architectural flexibility when planning for masking coverage in an area.

This topology is supported via the Qt X800/800D and the Qt X805/805D controllers. This allows for the masking controller to be located in the space while supporting 8 loudspeakers per controller mixing direct and indirect field emitters or speaker types. This follows a similar topology as previously accomplished using the Dynasound DS8000 controller. Each zone has a common master level for masking, music and paging sources in addition to level and equalization on a per output basis. Each output can be changed to support 4Ω, 8Ω, or DS1320 masking speakers.

Qt X controllers can mix and match in a configured system support speaker strings and individually controlled speakers in a common system. This allows for a larger system consisting of many architectural challenges to be supported and managed within one configuration. With the zoning options in Qt X groups of outputs may be set up to allow a common masking level to ease in commissioning larger systems. Within the created zones, fine-tuning adjustments can then be made to areas to achieve the appropriate SPL of the masking and sources. With the networking capability of all Qt X controllers, this topology can include IDF rack-mounted, wall-mounted, or plenum-mounted devices in any combination.