This system design template details an application for a multiuse retail-and-event space. A space such as this requires multiple music sources and volumes along with ease of operation to allow simple transition between modes.

This kind of space commonly has two primary uses. During the day, it promotes one specific business, and at night, it turns into an event space that is rented out for meetings or social gatherings. The system needs two modes: day — with distributed background music covering the whole space, with one micro zone where the music can be reduced in level for meetings — and night, which offers the same distributed sound but at a higher level and with a wider frequency response.

The system for this space uses a PREZONE2 two-zone preamplifier, with possibilities for wall panel control and web app control. Zone one is used to drive eight MASK6C wall-mounted cabinet loudspeakers at low level during the day. Zone two drives two SUBLIME subwoofers so that their level can be independently adjusted for the evening events.

In this example, we need to meet the following requirements:

The loudspeaker choice is assisted by the production of an Ease Focus simulation. In this example, the simulation demonstrated that MASK6 loudspeakers work well. Eight MASK6CT-BL loudspeakers give the required coverage, which is above 99dB for 90% of the space.

To allow for an enhanced frequency response, two powered SUBLIME subwoofers can be placed near to the bar and lounge areas.

Note: The front entrance is purposely not covered with any significant audio level so that visitors are not immediately aware of high-level sound.

The electronics rack contains four main devices in this example: 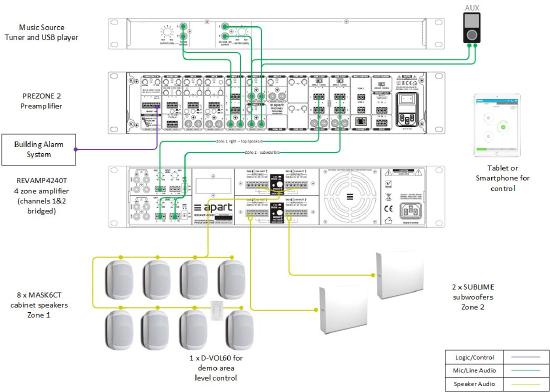 Following is a list of Biamp equipment needed for this example: