This article describes scenarios where direct echo can occur in systems with video tele-conferencing (VTC). These scenarios assume that correct AEC settings have been applied already but an echo is still present.

Direct echo is a "hard wired" echo path so the sound of the echo is clear and immediate.

A VTC device will typically have a mixed output available for routing to a recording device. If this mixed output is being inadvertently routed to the far end, it would result in everything – including their own voice – being sent back to them, which would sound to them like echo.

Echo at the far end

Issues can often be traced back to unintended signal paths in devices external to the Tesira.

One common source of echo frustration arises when the VTC is providing an unexpected signal path back to the far end. This can occur when both HDMI and analog connections are used on VTC devices, as is commonly seen when VTC's are used with video switchers, like the Crestron DM.

This can be tested in Tesira by muting the input from the video switcher and testing to see if the echo is still present. The examples below use a Crestron DM as an example video switcher: 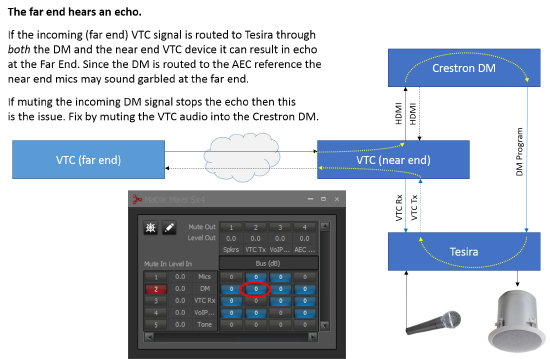 Another common point of failure is a VTC device which is providing loopback to the far end.

This can be tested for by muting the inputs and outputs of the Tesira. If the far end still hears echo it must be in an external device. Echo at the near end

If the VTC signal is incorrectly routed at the far end it can result in an echo at the near end. This will be heard as your voice coming back as a direct echo from the far end into the room you are commissioning.

“Loopback” may exist in the settings of either the VTC device or the video switcher (in the other location). Please refer to the article VTC with Cisco TelePresence endpoints