This article describes how to connect the TEC-1 to a Mute block in Tesira so the triangle indicator in the TEC-1 indicates the mute state of the selected channel. Adding volume control to the same Control Item adds functionality to the design.

This illustration shows the topology of the circuit being discussed. Elements are examined in detail below.

The TEC-1 can provide up to 32 discrete momentary logic output controls. Right click on the TEC-1 block to select "Edit Block Parameters..." and select the desired number of outputs under the Logic Output Count.
In the TEC-1 settings you will associate a Logic Control with a Control Item. Highlight the desired Control Item and select a Logic Index from the Logic Control menu. 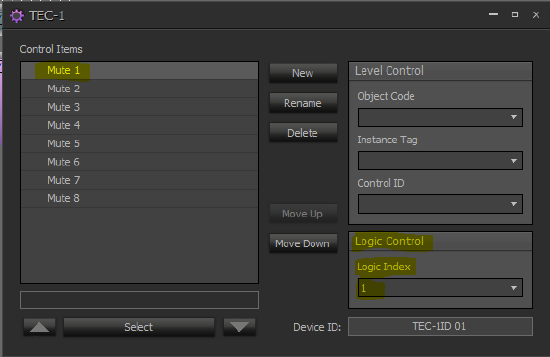 The flip flop gate is a logic element that converts a momentary pulse to a latching state, one pulse latches it high, another pulse flips the state to latch it low, and so on.

The flip flop gate should be placed inline between the TEC-1 and the Mute block.

Right click on the mute block to select "Edit Block Parameters..." and check the box in front of "Control Inputs". This will turn on the input logic nodes for the block, 1 node per channel. If the "Gang Controls" option is checked only a single node will be available.

It is possible to use both the Level Control and Logic Control with individual Control Items in the TEC-1.

The composite of both elements would allow you to create a Control Item which would mute and unmute a channel based on tapping the center of the ring, as well as modifying the volume via a Level Control block by using the ring interface. See the attached Tesira v2.2 file for an example of wiring the logic for a mute control attached to a TEC-1.