Acoustic Echo Cancelling (AEC) inputs provide support for distance conferencing applications. The AEC functionality is comprised of an input block, an AEC processing block and a reference block. All three blocks must be in the same partition.

There are several options available when you add AEC inputs to a system:

Include AEC Input block
For normal applications, this box will be checked and lines will be drawn linking the AEC Input and AEC blocks. Optionally, in Tesira, the AEC block can be linked to other non-AEC input cards (such as those in an EX-MOD) for a remote AEC solution, while leaving the associated SEC-4 analog input available as a standard input. It is just a matter of connecting lines to the desired input block. All of the components must be in the same partition for this to work. If you know you will not be using the analog input of the SEC-4 you can choose to add AEC without including the AEC input block by leaving this box unchecked.
Per channel reference
Checking this box creates an AEC Reference block with discrete inputs for each mic, allowing you to send a different AEC reference selection to each mic's AEC circuit. This may be useful in mix-minus (locally reinforced) systems. If "Per channel reference" is not selected the AEC reference block will have a single input that distributes the same signal to all of the AEC inputs associated with that block. Note that you need to connect an audio object to the output of the AEC Ref block for it to compile. The expectation is that it will be placed in line with the room loudspeaker output feed. If your layout gives the reference its own path, connecting an audio meter to the AEC Ref output will allow it to compile.
Equipment Type
When the AEC Input block is selected from the Object Toolbar, an AEC Initialization dialog is produced. Users can choose Autoconfigure to allow the software to automatically allocate it to hardware, or choose to manually assign it to a Server, Rack-mount Expander (EX-MOD with EEC-4 card), or Remote Expander (EX-AEC). Note: If you wish to specify a TesiraFORTÉ for AEC inputs, you must choose the desired model from the TesiraFORTÉ hardware list rather than selecting the AEC Input I/O block. The Meters tab gives information about how the AEC process is functioning. 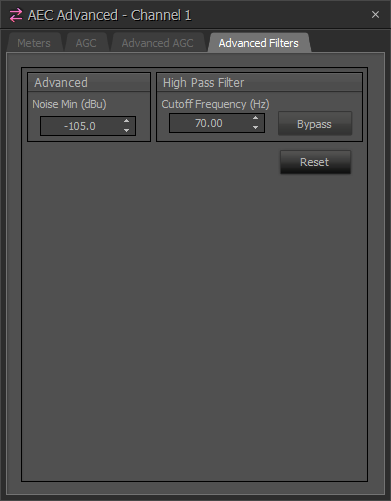 Noise Min – when the level of the signal at AEC input falls below this value, AEC will stop updating its filter. This setting is particularly useful for microphones with a mute button. If AEC still updates filter on a muted microphone, this may result in some echo being heard for a finite amount of time after the microphone is unmuted, while AEC filter updates its values. The Noise Min value can be set between the levels of microphone signal in muted and unmuted state to prevent AEC from updating its filter on a muted microphone.

High Pass Filter is a filter that attenuates input signal components below a programmable Cutoff Frequency. Values in the range of 20Hz to 500Hz can be set. The filter is an elliptic 5th order design which attenuates frequencies below the cutoff at a slope of 30 dB/octave. In most applications a HPF setting between 125Hz and 200Hz will be suitable, with 250Hz realistically being the highest frequency we'd recommend to use. It is important to listen to the mic with headphones to adjust the HPF properly - try to remove as much noise as possible without being destructive to the vocal content.

Tesira Server-IO and Tesira Expanders (EX-AEC and EX-MOD) have a 300ms tail length. TesiraFORTÉ devices feature a different hardware profile and support a slightly shorter tail length (250ms) which is suitable for all conference room applications.

AEC block will be labeled with an "S" in the lower right hand corner to denote the shorter tail length, if you:

Blocks will not compile

The single channel AEC Ref block requires a termination on its output. By design it would be placed just before the speaker output, but if it is on its own AEC Ref feed from the matrix then it must be terminated. Any blocks in that unterminated path will fail to compile and will have a "??" in the upper left corner rather than a device assignment. A microphone can never be sent to its own reference.

A mic can be sent to the reference of other mics in mix-minus applications.

If audio sounds garbled or "underwater" this is a symptom of a mic which is routed to its own AEC reference channel.

ERL values are the primary visual indication of correct levels for best AEC performance. They should be observed while the far end is speaking.

Residual echo can be caused by the round trip latency of the call being too long for the initial echo cancellation filters to handle. It is handled by non-linear processing (NLP). Try next NLP Level settings (i.e. switch from Low to Medium, or from Medium to High) to improve residual echo cancelling by NLP.

Here is a sample file with 3 partitions which shows a simple conference room, a conference room plus presentation mics, and a mix-minus system. You can use the Persistent Signal Path Identifier to see how the AEC Reference and signal routing is laid out.