If scaling is necessary, TesiraLUX will maintain the aspect ratio of the image to ensure that there is no image loss or geometric stretching distortion. This article explains the scaling process in TesiraLUX.

Resolution is the number of picture elements or pixels per line by the number of lines in the image. So when we say an image has a resolution of 1920x1080, each line will have 1920 pixels and the image will contain 1080 lines. These measurements also define the aspect ratio of the image as this is the ratio of the width to the height of the image. In this particular case, our 1920x1080 image will have an Aspect Ratio of 1920/1080 = 1.78:1 This can also be expressed with integer numbers as 16:9. The following image shows the most common resolution in use. Common colors indicate resolutions that share the same Aspect Ratio Scaling is the process of changing the resolution of a signal. As such, we can talk about downscaling when the resolution is reduced or upscaling when it is increased. In a TesiraLUX system, this process can happen both at the input (IDH-1) or output (OH-1) because both devices have a broadcast quality scaler. This is how TesiraLUX can send the same video stream to multiple outputs of differing resolution.

Scaling at the AV Inputs 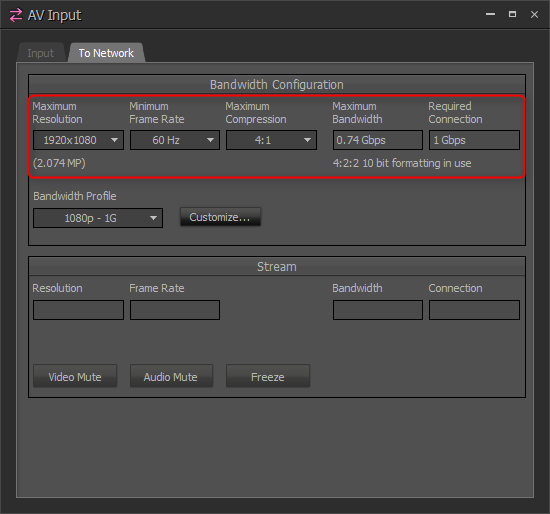 hen we establish the bandwidth configuration parameters in the IDH-1's AV Input block in Tesira software, we set up a maximum resolution to send over the network. We can think of this as a "fence" or boundary we can't cross. Ideally, this should match the device or signal connected to the IDH-1 to avoid scaling but that is not always the case.

These are the potential scenarios:

Scaling at the AV Outputs

Here are the potential scenarios:

The following table shows the resulting image given the sources aspect ratio and the output aspect ratio: