The AV Input block serves as an interface to accept a video and audio stream input. The block represents all of the inputs from a TesiraLUX IDH-1.  Along with nodes to route video and audio content from the IDH-1's HDMI, DisplayPort, and auxiliary audio inputs, there are also sets of logic outputs on the block.

These logic outputs provide status monitoring based on whether an active source is connected to HDMI (H Con) or DisplayPort (D Con), active video frames are being received on HDMI (H Rx) or DP (D Rx), and which input is actively selected (H Act, D Act).  These could be monitored for a variety of reasons, but perhaps one of the most common would be to provide auto-switching functionality.

As mentioned above, the AV Input block has 3 sets of logic outputs which can be used to provide state monitoring of sources connected to either the HDMI or DisplayPort inputs.  These can be used to trigger system presets and other logic functions, as well as troubleshooting video connections to the IDH-1.

H Con and D Con - These will utilize hot plug detect to go high when the corresponding input sees a source is physically connected.  This would be the first visual indication in confirming that video can be successfully transmitted from the IDH-1.

To implement auto-switching, monitoring the logic states of the HDMI Con and DP Con would be the typical approach.  As shown in the following two examples, these logic outputs can be used to trigger a preset which switches the input port of an AV Input block, or changes the I/O assignment of an AV Router block, upon connection of the source device.

H Rx and D Rx - These will go high when the IDH-1 is actively receiving a video signal from the connected source.  For example, a laptop may be connected to an IDH-1's HDMI input, driving the H Con logic output high, but we would not see the HDMI Rx go high until the laptop's external monitor was enabled to either mirror or extend it's display to the IDH-1.

The H Rx or D Rx might also be used to trigger auto-switching.  Perhaps there is a video switcher, or similar device, always connected to the IDH-1.  In this case, we could monitor the Rx logic inputs for active video frames being transmitted from that device.

H Act and D Act - These logic outs will go high when the corresponding input is selected in the AV Input block and it has a connected source transmitting video.  For example, the H Act logic output will go high only when the H Rx logic output is already high and HDMI is the currently selected input in the AV Input block. Since these logic outputs are dependent on the selected source, they would not normally be used to implement auto-switching functionality, but could be used to drive other logic functions or presets based on the selected active source. When the auxiliary source is connected to the IDH-1 HDMI input, the HDMI Con output will go high, triggering Preset Button 1 labeled HDMI Select. This preset contains the AV Input block associated with our IDH-1, controlling the Input Port selection, and switches it to the HDMI input.

When the HDMI source is disconnected, the HDMI Con logic output will go low, triggering Preset Button 2 labeled DisplayPort Select. This preset contains the AV Input block associated with our IDH-1, controlling the Input Port selection, and switches it to the DisplayPort input.

Let's expand on the above example and look at a scenario that might be found in an active learning classroom.  In this case we have 4 student work stations, each with a dedicated PC, laptop connection, and a local display.  There is also an instructor station with a laptop connection.

Using the logic example shown above, the dedicated PC at each student location would be displayed by default and the local source would auto-switch to their laptop when that connection is made.  But what about when the instructor needs to present to the class?  This auto switching functionality can be implemented in a similar fashion by creating a preset with the AV Router block.

When the instructor arrives and connects a laptop to their IDH-1 using an HDMI cable, the H Con logic output will go high, triggering our "Instructor to all Preset".  This preset contains the AV Router block and is set to route input 5, the AV Input associated with our instructor's IDH-1, to the AV Outputs for our 4 student displays. 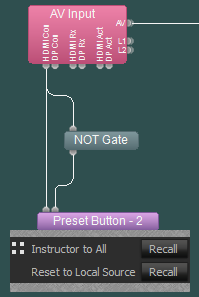 Once the instructor is done presenting to all of the student work stations, the laptop is disconnected, the H Con logic output goes low, and our "Reset to Local Source" preset is recalled.  This preset contains the AV Router block and is set to route each student work station input to its own corresponding output and local display. By using a combination of logic monitoring to trigger presets containing AV Inputs and AV Router blocks, a variety of different auto-switching scenarios could be accomplished, providing flexible source priority and dynamic auto-switching capabilities before even needing to implement an external control system.