This article demonstrates the capabilities of the analog audio inputs and outputs on the TesiraLUX IDH-1 and OH-1, respectively. The analog audio connections can be used for mic/line level inputs, routed to the audio partition for further processing, and combined with a video stream.

In addition to the embedded PCM audio channels in the HDMI or DisplayPort signal, the IDH-1 includes two balanced mic/line level analog inputs. The pair of analog inputs may be used in a similar way as a Tesira Expander, or the expansion module of a Tesira AVB Amplifier, the key difference being the signal will come in through the AV Input block in the video partition, and will need to be sent to an audio partition by way of a Partition Connector if further signal processing is desired. However, an audio partition is not required. Using the AV Combiner block, the audio from the analog input on an IDH-1 can be combined with any video stream and output to an OH-1 directly without a Tesira audio DSP in the system. Double click the PCRx Video to Audio block to link the receiver and transmitter. Alternatively, you can link the partitions by using the System View and connecting the Partition Connector Transmit and Receive blocks. The line between the partition blocks are a single stream, but may be multi channel. The Auxiliary Audio Controls include Audio Delay (ms), Peak indicator, Gain, Phantom Power, Mute, Level (dB), and phase Invert. All of these functions are provided by the IDH-1, and do not require a Tesira audio DSP.

Audio Delay is useful for syncing with video sources that have a lot of latency associated with them before they reach the IDH-1, such as a camera. The maximum analog audio delay that can be applied by an IDH-1 is 64 ms. This equates to a maximum of 2 frames at 30hz or 4 frames at 60hz. If more delay is required, the signal can be brought into an audio partition and put through a Delay block.

The IDH-1 analog inputs can be transmitted to the audio partition and routed through an AEC block. For more information on AEC, see AEC in Tesira. The OH-1 includes two balanced mic/line level analog audio outputs. The pair of analog outputs may be used in a similar way as a Tesira Expander, or the expansion module of a Tesira AVB Amplifier. An audio signal may be brought in via an AVB stream from an audio partition, or the embedded audio straight from the AV Input block.

Like the AV Input block, the AV Output block can be configured with a "single stereo port" or "two line ports" to represent the auxiliary audio outputs. 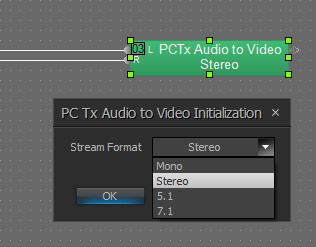 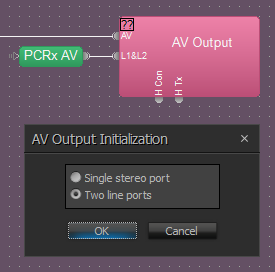 The Auxilliary Audio Controls include Audio Delay (ms), Mute, Level (dB), Invert, Full Scale (dBu). All of these functions are provided by the OH-1, and do not require a Tesira audio DSP.

The maximum audio delay that can be applied by an OH-1 is 64 ms. This equates to a maximum of 2 frames at 30hz or 4 frames at 60hz. If more delay is required, the signal must be put through a Delay block in an audio partition.

The embedded audio from a video source can be directly routed directly to the analog outputs of an OH-1 without routing from an audio partition. The audio will be mixed down appropriately from multi channel stereo/mono.

For more information on how up- and down-mixes are handled in TesiraLUX, see Video to Audio Partition Connections.

Tesira Event Logs will indicate talker stream creation and which stream the listener is listening for. Depending on the configuration of the LUX device, we expect to see 4 or 5 streams presented by a LUX IDH-1. The naming is similar to the following:

Here is an example from the switch perspective. Tesira Event Logs will correlate the stream type with the stream ID as shown below.