Sending video signals over standard Ethernet networks can consume a lot of bandwidth on the network. In an ideal world, we would always send uncompressed 4K video everywhere, but in reality, many networks are not designed to handle that much bandwidth. Luckily, TesiraLUX is designed with several mechanisms to control the amount of bandwidth consumed by video AVB streams. This article describes these bandwidth controls and provides advice on how to best use them. TesiraLUX provides user control over three video parameters to change the amount of bandwidth required by the signal.  Those three parameters are Resolution, Frame Rate, and Compression. There are two important things to note about how TesiraLUX goes about reducing bandwidth using these controls:

All of the bandwidth controls in Tesira are located in the AV Input block, in the "To Network" tab. The Maximum Bandwidth that can be consumed by the AVB stream associated with an AV Input block is calculated based on the values that you select for Maximum Resolution, Minimum Frame Rate, and Maximum Compression. The software calculates the bandwidth that would be consumed by a signal with the selected resolution, frame rate, and compression level; and displays that bandwidth in the Maximum Bandwidth field.

However, it's important to note that not every video signal associated with that AV Input block will necessarily have the chosen resolution, frame rate, and/or compression level. The actual specs of the resultant video signal can be different, as long as the bandwidth it consumes is less than or equal to the Maximum Bandwidth.

We'll take a closer look at each of the three bandwidth controls below, remembering that the controls are always applied in order (resolution, then frame rate, then compression).

The Maximum Resolution control allows you to put a cap on the resolution of the signal that is transmitted over the AVB network. For instance, if you know that all of the displays in the system only support up to a 1080p resolution, then it would make sense to cap the resolution at 1920x1080.

Once the signal has been scaled down to an appropriate resolution, TesiraLUX will check how much bandwidth the signal is consuming. If the required bandwidth is already less than or equal to the Maximum Bandwidth allowed for that AVB stream, then no further modifications will be made to the signal (the signal's frame rate won't be changed, and no compression will be applied to the signal).

Once the signal has been scaled down to the appropriate resolution and the frame rate of the signal has been reduced, TesiraLUX will check how much bandwidth the signal is consuming. If the required bandwidth is already less than or equal to the Maximum Bandwidth allowed for that AVB stream, then no compression will be applied to the signal.

Below are some examples of how TesiraLUX would behave in different scenarios. For all of these examples, assume that the bandwidth controls are set as follows:

Example 2: Input signal is 1280x720 @ 30Hz
Since the input signal's resolution is already lower than the Maximum Resolution, it won't be scaled up. And, since the frame rate is already at the minimum, the frame rate won't be modified either. A signal of 1280x720@30Hz consumes a bandwidth of 0.69 Gbps, which is higher than the Maximum Bandwidth of 0.41 Gbps, so TesiraLUX will need to apply some compression to reduce the bandwidth. TesiraLUX only applies the least amount of compression that is needed to reduce the bandwidth under the maximum. In this case, a compression of 2:1 will reduce the bandwidth to 0.38 Gbps, so that is what will be applied.

Below are some recommendations for how to set the bandwidth controls to obtain the best results.

Note that the bandwidth controls in Tesira don't have to be static. They can be changed on-the-fly using presets or TTP commands to adapt to different scenarios or applications. For instance, a system could have two presets that switch between two modes: "spreadsheet mode" lowers the frame rate to 15fps and turns off compression, while "movie mode" increases the frame rate to 60fps and turns on compression up to 4:1.

There is never a need to set the Maximum Resolution higher than the native resolution of the display that will be receiving that video signal, because that would result in a high-resolution, high-bandwidth signal being transmitted over the network, just to have it scaled down to a lower resolution before being delivered to the display. It's more efficient to scale down the signal first, and then transmit it over the network at the lower resolution.

The Minimum Frame Rate control has three settings: 15fps, 30fps, and 60fps. The appropriate setting for this control depends on the nature of the signals that will be sent. For example, video signals that have a lot of continuous motion (like television signals, movies, camera feeds, etc.) will look best at 30fps or 60fps, but the motion would begin to look very choppy and distracting at 15fps. However, video signals that are relatively static (like spreadsheets, PowerPoint presentations, etc.) will not suffer any loss of quality if the frame rate is reduced to 15fps. Since a 60fps signal uses four times as much bandwidth as a comparable 15fps signal, you can save quite a bit of bandwidth by reducing the frame rate when a high frame rate is unnecessary!

The higher the ratio, the more compression artifacts will be introduced into the signal. However, the lower ratios of 2:1, 3:1, and 4:1 are generally regarded as being "visually lossless" for all types of content, which means that the average person cannot tell the difference between the compressed and uncompressed signals. As the ratios are increased, visual artifacts may gradually begin to become detectable. For continuous tone imagery (real world images and motion video), artifacts may not be noticeable until you reach an 8:1 ratio.

Visual artifacts can often be more noticeable on static signals with a lot of small details, like spreadsheets. Therefore, it is often preferable to lower the frame rate on these types of signals and reduce (or eliminate) the amount of compression that is being applied to them. But, even with spreadsheets and other computer-generated graphics, compression artifacts should not be noticeable at a 4:1 or lower compression ratio. 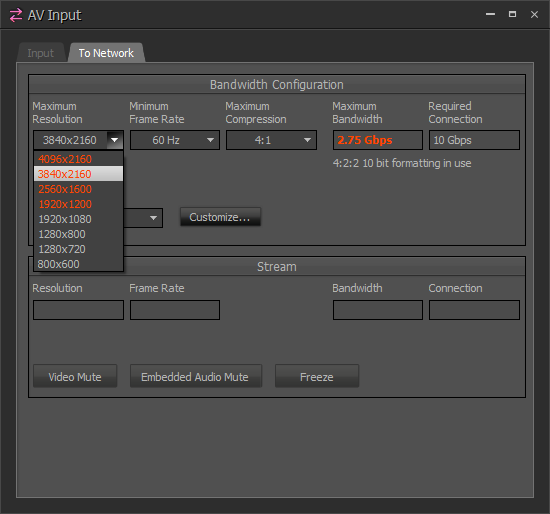 Next to the Maximum Bandwidth field in the AV Input block is a field labelled "Required Connection". This field will read either "1 Gbps" or "10 Gbps", and it tells you whether you'll need to use the 1Gbps copper RJ45 connection or the 10Gbps fiber optic connection on the TesiraLUX devices. If the bandwidth is 0.75 Gbps or lower, you'll use the 1Gbps copper connection. If the bandwidth is higher than 0.75Gbps, you'll need to use the 10Gbps fiber optic connection. This is because AVB streams are generally not allowed to use more than 75% of a network link's available bandwidth.

Tesira software will not allow you to configure the bandwidth controls such that the Maximum Bandwidth is greater than 0.75Gbps if you are working within a 1G Video Partition. In this case, the text will turn red to indicate that it is not possible (see screenshot to the right).

Also note that if an AV Input block is in a 10G Video Partition, it will always utilize the 10G fiber optic port on the IDH-1, even if the required bandwidth is below 0.75Gbps. TesiraLUX does not allow dynamic switching between the copper and fiber port; it will only use one of the two ports.