You can use one or more of the IO's as an Input in order to trigger any sequence or event in Biamp Project Designer. It might be an external button, switch, PIR motion sensor, or partition sensor which enables an event in the controller, like combining two rooms and locking buttons in the secondary room.

An input can trigger in two different ways, high or low.

In the schematic below, you can see that the controller accepts voltages up to 24 volts and a short to ground. 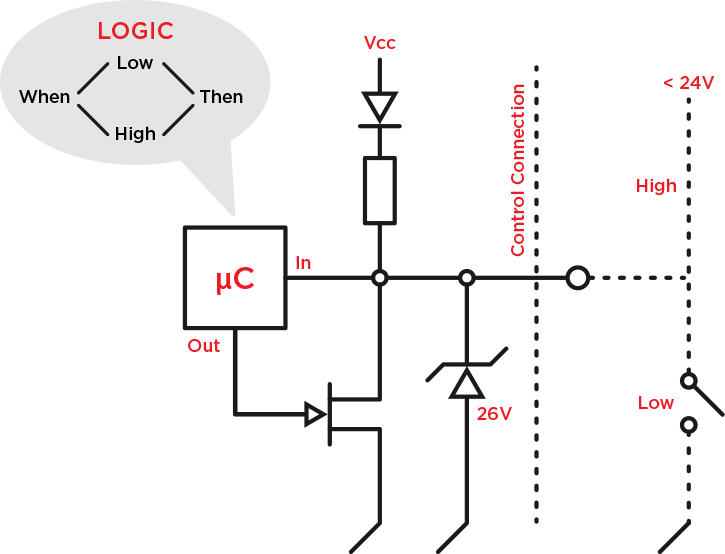 In the Systems page of Project Designer, you assign one of the IO's as an Input as shown below:

Then go to the Feedback section and give the input a function as shown here:

Remember that the GPIO input is looking for voltages above or below the following thresholds:

When in doubt, use a multimeter to measure the output of the switch or sensor and document the findings. Then connect the switch or sensor to the GPIO and take the measurements again. In some applications, the sensor output may not pull the circuit down below the 1VDC threshold. If this is the case, a resistor can be added to the circuit in series or parallel with the sensor. Measure and test until expected functionality is achieved.

24VDC is a common sensor logic output used as the 'High' output of sensor; when connected to the GPIO of an Impera controller, the 'Low' output may only pull down to 3VDC. This will not pull down far enough to trigger the 'Low' so applying a 4.7k or 10k ohm resistor to the circuit will change the measured 'High' and 'Low' to operate within the proper range.