This system design template shows how Biamp products can be used in a supermarket to offer background music, paging and sound masking. Such systems need low-level background music to be played throughout the supermarket which can be fed from multiple music sources. The central paging microphone can easily used to make announcements throughout the whole store. A sound masking system is employed in the pharmacy area to guarantee privacy when a private consultation is being made.

In this case, the supermarket floor space is covered by sound from 12 P60DT pendant speakers, this number of loudspeakers can be reduced or increased with the related adjustment in the amplifier power needed.

Two music sources are in use, primarily the store internet radio station and secondly a backup SD/USB player. These signals are fed along with the MICPAT-D paging mic audio and logic signals, to a TesiraForte AI. Two outputs are used from the TesiraForte, one to the amplifier for BGM distribution to the amplifier and pendant loudspeakers, the other feeds the QT Sound masking system. The sound masking system provides privacy at the pharmacy consultation desk so that private conversations are not heard by other shoppers.

The music source and volume can be controlled from the TEC-1 wall panel located behind the customer services desk.

The MICPAT-D paging mic, also located at the customer service desk, allows for simple live paging messages to be fed to the whole store quickly and easily.

At any time, the audio system can be overridden when the building alarm system is active.

The building alarm system has a logic output which will become active in cases of emergency. This logic signal is connected to the TesiraFORTE AI and the QT300 sound masking processor so that when it is active the background music, paging and sound masking audio are all muted in an emergency situation.

A simple Tesira design file is available below for this system

Two stereo source inputs are included which can be selected to both mono output zones at the same time, the sound level to each zone can be independently adjusted on the TEC-1 wall panel.

The .zip file below contains the example Tesira configuration files for this supermarket application.

There are two user interfaces in this system.

The TEC-1 wall panel allows for simple control of the music source to be played and level in the supermarket to be controlled via a rotary control.

The MICPAT-D paging mic is simple, robust and intuitive with a single 'paging on' switch, with momentary or latching function, and a sensitive gooseneck microphone. 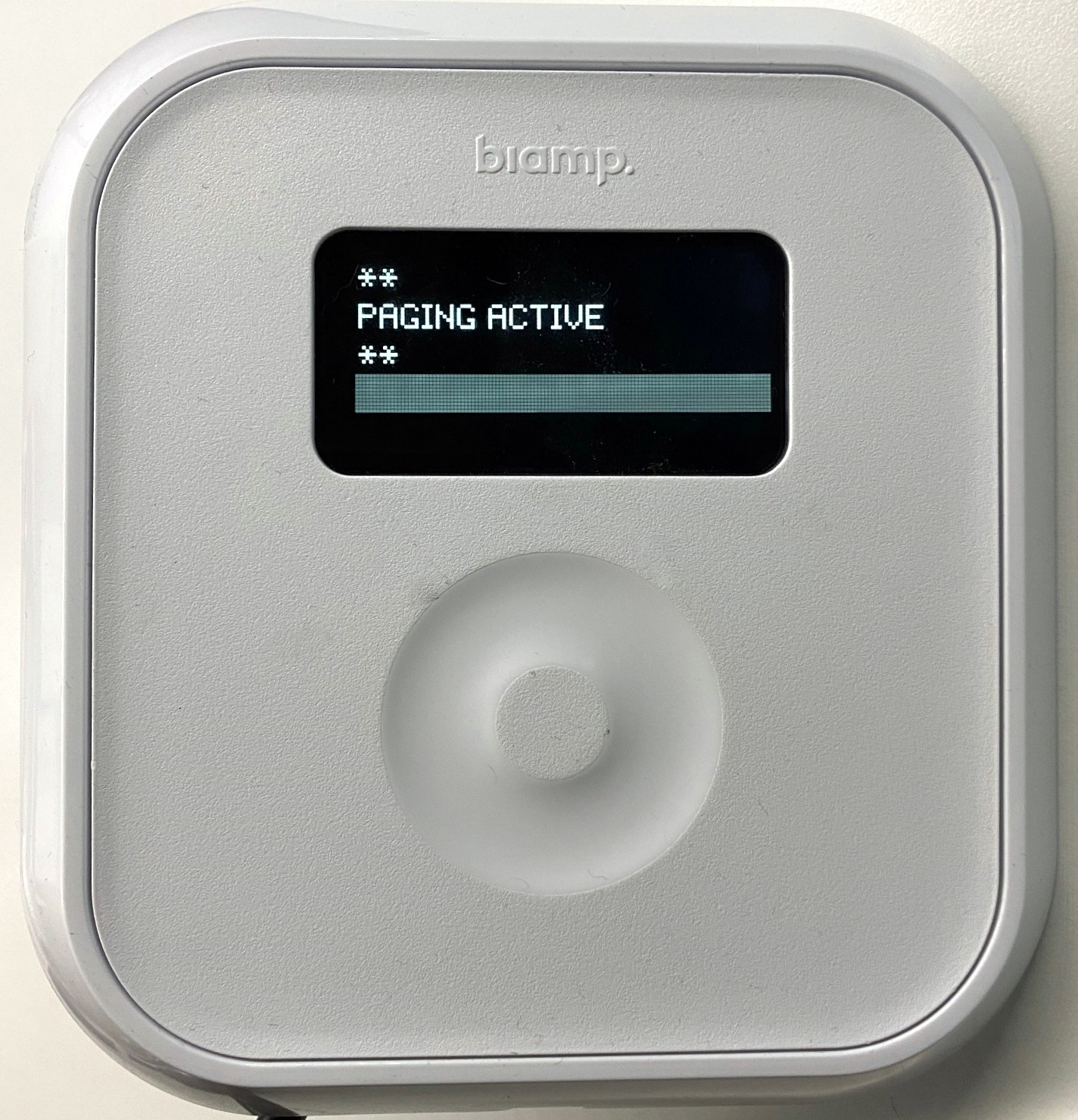 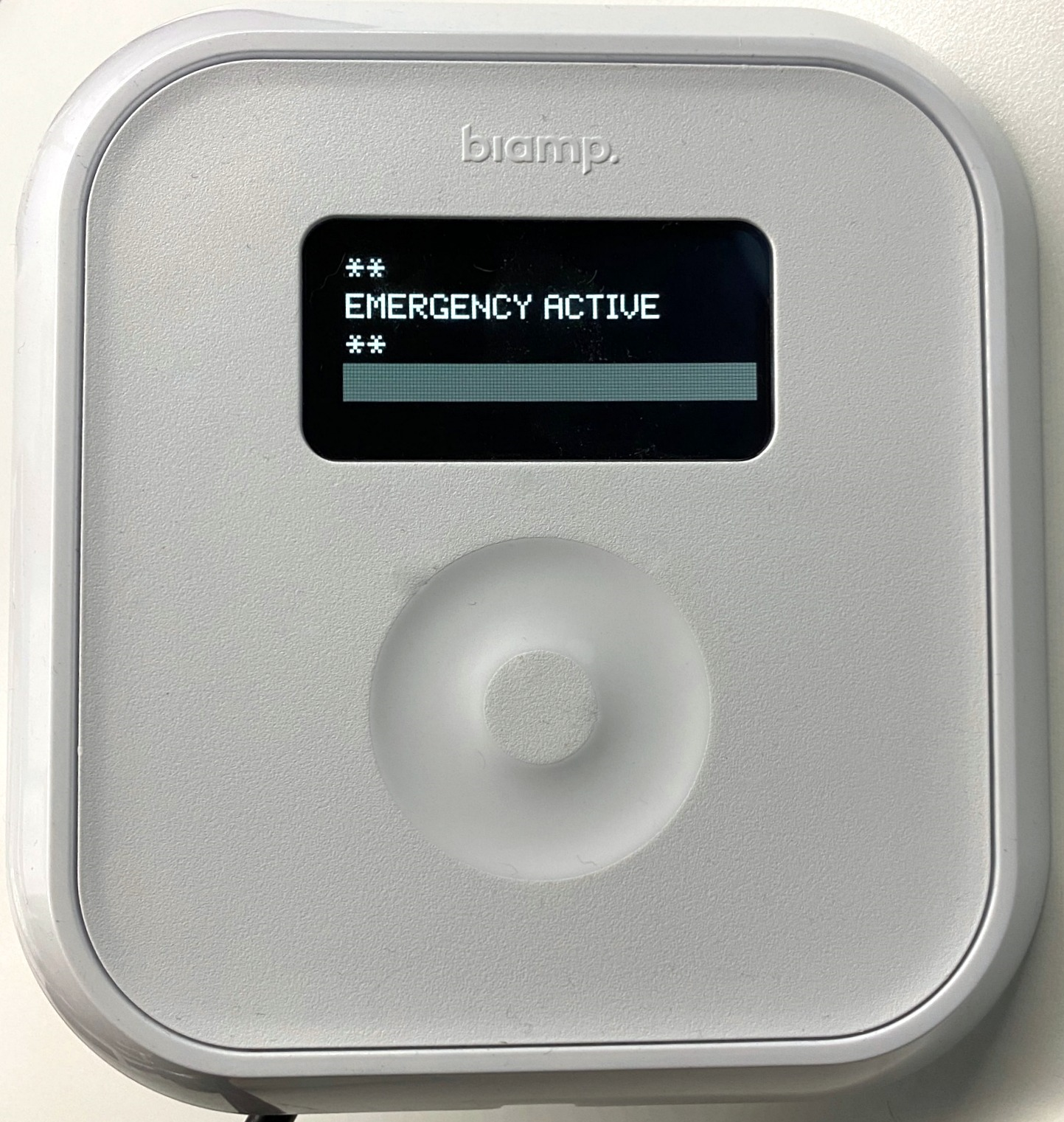 When the paging mic is active, a message indicating PAGING ACTIVE appears on the TEC-1 wall controller.

When the emergency logic input is active, a message indicating EMERGENCY ACTIVE appears on the TEC-1 wall controller.

When using the TC-5 network interface, the TesiraFORTÉ AI Control port, TEC-1 Ethernet port and control PC Ethernet port should be connected to the TC-5 network interface. The Tesira FORTÉ AI device will need to be discovered in Tesira software before the configuration can be sent. The default network configuration of TesiraFORTÉ AI and TEC-1 units is DHCP, so when using TC-5 there is no DHCP server included on the network the units will revert to Link Local addressing (169.254.xxx.xxx, netmask 255.255.0.0) schemes. More details on the initial connection to the system can be found in TesiraFORTÉ Quickstart article.

For the configuration to work properly on TEC-1 devices, Device IDs in TEC-1 software blocks should be checked to match Device IDs of the actual devices on the network.