The Devio headset interface enables handset telephones with a headset function to integrate with Devio. This integration enables the handset to connect to Devio's loudspeaker and microphone, and calls made with the handset to be bridged into soft codec web conferences running on laptops that are also connected to Devio, as well as any conversations occurring on mobile devices that are connected to Devio via Bluetooth. This feature was implemented in Devio to enable potential integration with phones that have been previously deployed into huddle rooms.

A note about sidetone

When you talk into a telephone handset or a cellphone, you may hear your voice played back to you at a low level in the earpiece. This is what is known as sidetone, and its purpose is primarily to assure the talker that the call is still active, as well as to allow the talker to hear themselves so that they are discouraged from talking too loudly. This functions well when speaking into a traditional cellphone or telephone handset that is being held to the mouth and ear, but can be distracting and undesirable when telephone audio is being produced via speakerphone into the room, as the local talker's voice will be played back with a slight delay into the local room via the loudspeaker, which can sound like an echo.

In previous iterations of Devio firmware, it was necessary to disable sidetone within the local telephone's settings. As of firmware version 1.2, Devio features an internal sidetone canceler. This means that it is no longer necessary to disable sidetone on the local telephone that is being integrated with Devio's headset interface, as Devio will handle the elimination of sidetone and prevent the local talker's audio from re-entering the room via the local loudspeaker. If integrating Devio with a handset telephone, it is recommended to update the Devio to firmware version 1.2 and just leave sidetone enabled on the telephone.

The following telephone makes and models have been informally tested with and shown to be compatible with Biamp Devio's headset interface1. While other handset telephones may function with Devio, these are the only ones that are currently recommended. As with any third-party equipment, it is recommended to complete pre-installation validation testing in the live production environment to ensure interoperability with Devio and provide time for any troubleshooting that may prove necessary. If considering integration of a handset telephone other than those listed below, bear in mind that additional testing and troubleshooting may be necessary, and a viable interoperability solution may not be found.

Wiring a handset telephone to the Devio CR-1

On the back of the Devio CR-1, there is a 4-pin headset interface port:

Included in the packaging for any Devio system is a black, 4-pin Phoenix connector for connecting to this port.

The headset jack of a standard handset telephone is intended for use with a 4-position, 4-connector (4P4C) plug. This type of plug is also commonly referred to as an RJ-9, RJ-10, or RJ-22. At this time, Devio has not been tested or validated for use with non-4P4C headset jacks, and attempting to integrate these is not recommended. Connect the Devio CR-1's headset interface port to the telephone's headset jack via a purchased or custom-built straight-through cable; the cable should have a 4-pin Phoenix connector on the Devio end and a 4P4C plug on the telephone end.

If the telephone handset supports external speakerphones, it will have a port for the 4P4C plug. If it does not have this port, additional wiring or a different handset telephone may be required.

Wiring a handset telephone to the Devio SCR-25

On the back of the Devio SCR-25, there is a 4P4C headset interface port:

The headset jack of a standard handset telephone is intended for use with a 4-position, 4-connector (4P4C) plug. This type of plug is also commonly referred to as an RJ-9, RJ-10, or RJ-22. At this time, Devio has not been tested or validated for use with non-4P4C headset jacks, and attempting to integrate these is not recommended.

The correct pinout configuration for SCR-25's headset interface port will vary depending on the make and model of the telephone. Rather than having to physically rewire the headset plug to function with a particular telephone make and model, the SCR-25 has 6 pre-configured pinout settings that can be selected within the SAU. These settings can be accessed and adjusted by double-clicking an SCR-25 in the SAU's Device List, as shown below:

It will be important to test with each of these 6 pinout configurations and determine which one sounds best for the particular telephone being used. Once the best-fit pinout configuration has been determined, this setting can be applied simultaneously to any Devio SCR-25 systems on the network. To do so, select all relevant devices in the Device List, then adjust the pinout setting in the Properties sheet. Clicking the Save icon will apply this setting to all selected SCR-25 devices. 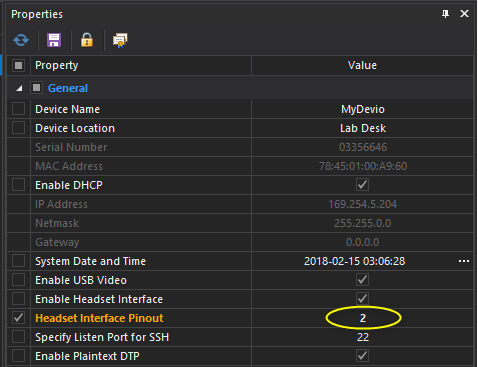 The chart below details the pinout configuration being implemented for each pinout setting number: 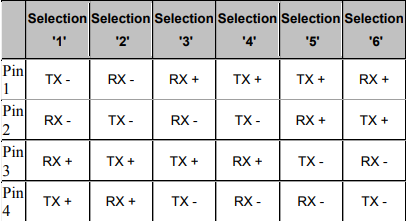 The list below contains some common telephone makes and models with the pinout settings that have been validated for use with them:

By default, the headset interface will be disabled on Devio. In order to utilize this feature, you must first enable it via the System Administration Utility (SAU), webpage interface, or API. The instructions below will guide you through each of these methods.

Enabling the headset interface in the SAU

Enabling the headset interface in the device web page

Enabling the headset interface via the Devio API

How to use the headset interface

While the exact headset icon may vary between telephone models, any handset telephone that supports a headset port should have a headset button similar to the following:

Once you have wired the handset telephone to the Devio unit's headset port and enabled the headset interface for Devio, simply press the headset button on your telephone to activate the connection to Devio. Pressing the headset button again will deactivate the connection to Devio. Common use cases for this capability include joining a caller to a soft codec web conference occurring in the room (either when a call is incoming into the room or a call is made on the handset out of the room) or just using Devio as a speaker phone accessory for the handset.

1. Manufacturer specifications can change without notice. Biamp Systems strives to keep this list up to date, but is not always made aware of changes made by third parties to the telephones referenced, and therefore Biamp Systems cannot guarantee compatibility with any of the products listed on this page.