This article describes how to interpret microphone sensitivity ratings with respect to the analog mic input of a Biamp processor.

Microphones are transducers — they are devices that convert mechanical energy (the motion of the air caused by sound waves) into electrical energy (voltage).

Mics are rated by their sensitivity. This refers to the output voltage a microphone generates at a given sound pressure level (SPL). The standard "reference" SPL is a 1,000Hz tone at 94 dB-SPL at the mic capsule. Therefore, a microphone's sensitivity is expressed as the mic's output voltage when the mic capsule is presented with a 1,000Hz tone at 94 dB-SPL.

The Gain In setting on the Biamp DSP input block allows you to boost (or amplify) a low incoming voltage from a microphone (or other device) to a higher level that is appropriate for the DSP. Ideally, a microphone signal should be amplified until it registers an average level of 0dBu RMS while it is being spoken into at a normal volume and a normal distance.

All professional microphones come with a product data sheet that show the voltage the mic will generate for a known reference dB-SPL (sound pressure level). Here are some common terms you may encounter:

How do I interpret these numbers?

Biamp DSP processors measure signal levels in dBu, which is a slightly different scale than dBV. dBu is always equal to dBV plus 2.21.

Let's say you have a mic with a rated sensitivity of 10mV/Pa. Using a decibel calculator, we can find that 10mV is equivalent to -40dBV. To hit 0dBu on the Biamp's input meters when a 94dB-SPL reference tone is applied at the microphone capsule (using a mic calibration tool) we would need to add about +40dB of gain at the input. (Again, Biamp DSP processors measure signal levels in dBu, which is a different scale than dBV, so technically you would only need about 37.8dB of gain. dBu is always equal to dBV plus 2.21.).

But, this assumes that the mic will be receiving a 94dB-SPL signal during normal operation, which is unlikely to be the case. If that mic is expected to function with an average 74dB-SPL input, then an additional 20dB of gain is needed. Now the signal should register near 0dB on the meters when the mic receives a 74dB-SPL signal. The total input gain would be about +57.8dB on the input block (the initial 37.8dB plus another 20dB).

From a practical point of view you will only be interested in the total gain applied but it is good to know how it is determined.

We commonly see Gain In levels of 48dB for ceiling mics in conference systems, of course, this will vary with the type of mic being used and the distance of the mic from the source.

When ceiling mics are used, it may be difficult or impossible to achieve 0dBu without also capturing unusable levels of ambient sound. In that case, a lower level may have to suffice, in conjunction with the use of noise reduction on the channel (if available). The gating automixer will also be of assistance.

Is higher sensitivity better? It all depends on what you are doing. For making a recording of bird songs in the Amazon, an ultra sensitive mic with very low "self-noise" may be just the thing, but that same mic would be overkill for a conference space. For a conference system, we want a blend of adequate sensitivity, low self-noise, and proper pattern design (as well as a reasonable price) for the application.

Of course it is important to remember that microphones capture all sounds — not just voices, but also barking dogs, chainsaws, squeaky chairs, rustling papers, tapping pens, HVAC systems, street noise, and much much more. Getting the sound you want (voices) requires careful and thoughtful positioning of the microphone as close as possible to the person speaking. 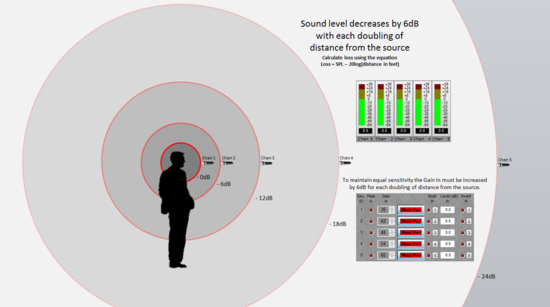 Here are a few examples from spec sheets of familiar microphones. They have different notation, but they are telling us the same things. This should help you learn to recognize the common properties of the notations.

A microphone with a higher output level is said to be "more sensitive" than one with a lower output level. These numbers allow you to make broad comparisons before purchasing a microphone. They do not reflect audio quality or the "sound" of the microphone.

You can manually convert between values easily by remembering two things: that a 6dB change is always a halving or doubling of the previous voltage value, and the reference voltage you're working with. The reference will be 1v for dBV, or 0.775 for dBu.

Of course - it is much quicker to just use the proper formula! In Excel use the following "=20*LOG10(voltage/1)"

What if you want to determine the voltage output of a mic rated for -50 dBV/Pa?

So we could restate the sensitivity to say that the mic produces 3.16mV when exposed to a 1kHz tone of 94dB-SPL at the capsule.