Dynasound Pro 70 Volt Sound Masking System provides a consistent and even distribution of sound masking noise. It stands to reason to think this system can also be used for paging. Integrating a Vocia Paging System with a Dynasound Pro 70 Volt Sound Masking System is a fairly easy process but it requires understanding some key concepts, careful planning and design. This article covers some basic concepts and the steps to estimate minimum system requirements for a specific project.

Whether you are familiar with Vocia or Dynasound Pro, it's important to understand the distinction between the concept of zones in the scheme of these two platforms. This becomes more critical when these two systems will be integrated. While zones may mean the same thing in some particular cases, it's not always the norm. For this reason, it's important to use the correct terminology when designing a system to avoid confusion. Here are some key differences between Sound Masking Zones and Paging Zones 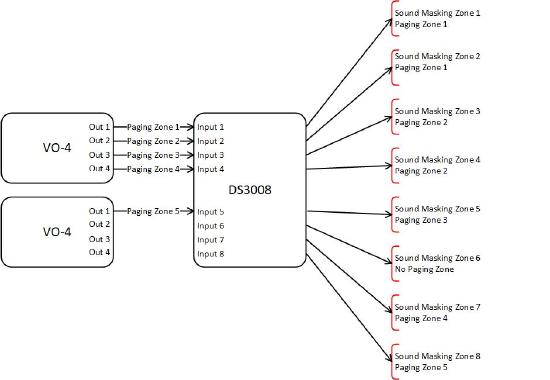 Adding external analog inputs to Dynasound Pro Network Sound Masking Systems requires the DS3002 or DS3008 Paging and Music Interface. These units provide 2 and 8 analog inputs respectively that can be used for paging and/or background music. These signals can be routed to any of the analog outputs. Privacy Manager software allows setting audio input levels, sound masking generator and level for each output. When we use Vocia for BGM and Paging, all the control is handled by Vocia. In this case, one or two VO-4s can be interfaced with a single DS3008 to provide 4 or 8 Paging Zones respectively. These signals will be present at the analog outputs that feed 70 Volt amplifiers. If Paging and BGM are not required in some Sound Masking Zones, those can be left as Sound Masking only. The diagram on the right illustrates this concept

Interfacing Vocia with Dynasound Pro 70 Volt is done thru the DS3002 or DS3008. This makes it easy to estimate equipment needs as it all comes down to the number of Paging Zones required:

Connecting the VO-4 outputs to the DS3008 inputs is an easy process. Both the VO-4 and DS3008 use Balanced, Line-Level analog terminal block connections. These connections should be made balanced audio cabling (two conductors plus shield) and the wiring should be point to point (i.e positive to positive, negative to negative and shield to shield).

Once the system is wired and the Vocia file has been created and loaded into the system, some Audio adjustments are needed to ensure proper signal routing and levels. Both, the VO-4 and the DS3002/DS3008 use line level analog signals so audio calibration is straight forward. The following steps highlight the process:

Here is a list of things to check if something doesn't work right: