On startup, the Modena App will show the user a list of available rooms. To ensure rooms are visible in complex network environments, Modena features a sophisticated discovery system. 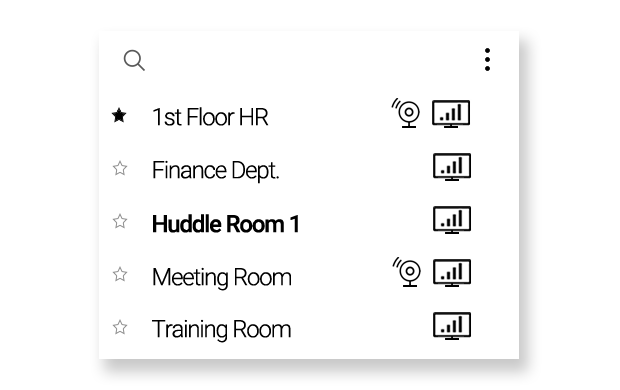 If the Modena App is within the same subnet as the Modena Hub(s), and the network is configured to allow it, the room list is populated automatically via the discovery service.

Broadcast packets are not routed outside a subnet and for this reason automatic discovery will only function when both the Modena Hubs and the Modena Apps are in the same subnet.

When UDP broadcast is not permitted, or when Modena Hubs are in different subnets than the Modena App, the automatic discovery service may not be able to reach all Modena units and show their available rooms. For this eventuality, the Modena App offers a Find Rooms feature, which allows a user to discover a Modena Hub via its IP address.

In complex network environments, the Modena App(s) in one subnet will not discover the Modena Hub(s) in another. This may be the desired configuration, as it may be practical to separate groups of units logically (e.g. on a per-floor basis in a larger deployment).

If you wish the user to discover devices automatically across subnets, you can designate one Modena Hub as the primary and configure further devices as secondary hubs; which will share their room lists and IP addresses with the primary. This will allow a user with visibility of the primary Modena Hub to see all available rooms hosted by associated secondary devices.

This option can be selected in the Modena advanced configuration page.

Tick the checkbox to make a device the primary hub. If you wish to configure a device as a secondary hub enter the IP address of the Modena Hub defined as the primary.

The advanced discovery mechanism allows the Modena App to display all rooms available on the network regardless of the subnets in which they are installed. It is also possible to configure more than one primary and in the case each primary will create its own cluster of Modena units.