The Control Tunneling feature allows bi-directional communication tunnels to be created in a Tesira system. Each Control Tunnel is point-to-point within a single Tesira system and can be configured as Serial-to-Serial or SSH-to-Serial. Once the Control Tunnels have been established, third-party control products may use them to control connected devices such as displays or Pan-Tilt-Zoom (PTZ) cameras.

Control Tunneling is supported on TesiraFORTE, TesiraLUX, SERVER-IO and SERVER devices that are running Tesira firmware version 3.8 or later. However, it is not currently supported on redundant SERVER pairs or EX-LOGIC expanders. The SSH-to-Serial Tunnel allows a third-party controller to establish an SSH session with a Tesira server class device (within a Tesira system) and communicate via its serial port. Once configured, this SSH Control Tunnel acts like a serial port extender using SSH. The third-party controller authenticates with the Tesira device to send and receive serial commands via the connect RS-232 port. An example is shown below: The Control Tunnel is a one-to-one assignment within a Tesira system. If changes are made to the equipment table that affects existing Control Tunnels, Tesira software will notify the user with the following error:

The Control Tunnel map must be corrected or updated before the Equipment Table changes can take place.

Control Tunnels are established when the Tesira configuration is sent to the Tesira hardware.

The Tesira Serial ports included in a Control Tunnel must be configured to match the Usage and Baud Rate needs of the connected controlled device or controller. These configuration changes are made in the Port Settings section of Device Maintenance for each respective Tesira device. When these steps have been completed, the Equipment Table will confirm serial port settings: If an SSH-To-Serial Tunnel is defined, SSH must be enabled on that Tesira device via Device Maintenance > Network Settings. 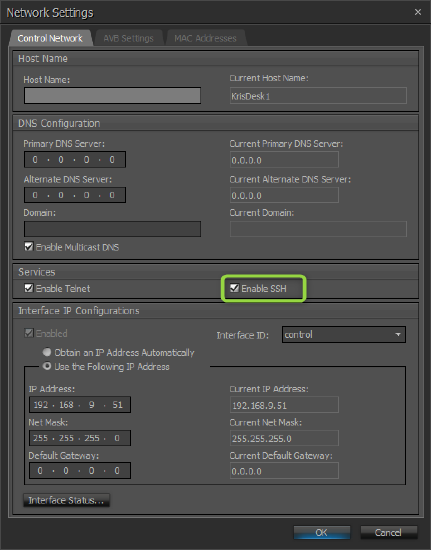 Each SSH-To-Serial Tunnel supports one active user session at a time. The third-party controller must create an SSH session directly with the Tesira device that is hosting the SSH-to-Serial Control Tunnel, and will be required to authenticate using the following credentials: