This system design template shows how Biamp Tesira and Microsoft Teams Room systems can be integrated with the Sennheiser TeamConnect Ceiling 2 mic array to support a large meeting room.

In this example a large meeting room is defined as a meeting space about 15' x 28' (4.5m x 8.5m). This system supports Microsoft Teams meetings, with all control originating from the Microsoft Teams Room user interface. The TesiraFORTÉ and EX-UBT communicate with Microsoft Teams to sync mute state from the user interface and allows this status to be reflected on the TeamConnect Ceiling 2 LED indicators. A PoE+ amplifier mounts directly to the Desono ceiling speakers, which are located at suitable positions to evenly cover the meeting room with the far-end voice and USB audio. The TeamConnect requires Dante for routing signals to and from the ceiling microphone. Single channel Dante to analog input and output convertors are used to facilitate the connection to a physical input and output on the TesiraFORTÉ AVB VT4. Below is the list of Biamp equipment used in this system configuration:

The example file for this system design template is set up with all the audio I/O, processing, and control points required. The file's Equipment Table is populated with the proper hardware to match the layout, but will need to have serial numbers and proxy host assignments added before loading the file to system.

To support the conferencing needs of the space, the microphone signals are routed to the USB output. All AEC references have been made in the matrix mixer for proper echo cancelation of the far end audio.

To assist with deployment and commissioning of systems which include the Desono C-IC6, a Tesira Library File (.tlf) has been created. This includes a custom block with Biamp's recommended EQ curves to optimize the sound of the C-IC6 loudspeaker. This custom block has been included in this system design template file. These blocks can also be found in the Processing Library in Tesira software.

The .zip file below contains the example Tesira configuration file for this conference room application.

Setting the audio device from the Microsoft Teams Room System

From the Features menu, use the dropdowns to select the EX-UBT.

By default, the Microsoft Teams Room System volume control will set to 50 when a meeting is started. This level will be reflected in the EX-UBT USB Input block as shown below. The Sennheiser TCC2 can be controlled by a 3rd party device over UDP port 45. This is accomplished in Tesira by using a Network Command String block and requires that the Tesira control port be connected to the same network as the TCC2 PoE/Ctrl port. The IP address assigned to the TCC2 PoE/Ctrl port is entered in the Server Address field.

HID mute sync feedback from the Teams Room System is used to set the LED color on the TCC2, Red for privacy “mute on” and Green for privacy “mute off”. This also triggers a Mute block to mute and unmute the audio being sent to the far end participants.

When configuring the TCC2 from Control Cockpit, be sure to set the Custom Color to Red and leave the mic unmuted. Privacy mute will be handled in Tesira, post AEC processing. 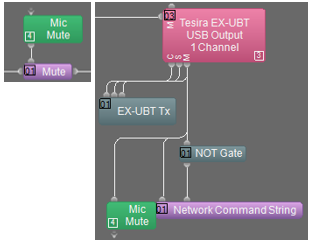 The TCC2 is a ceiling-mounted dynamic beamforming microphone. It supports both Dante (input/output) and auxiliary balanced analog (output) connections for audio transport. A PoE/Control connection and the Sennheiser ControlCockpit software is required to begin setup.

With the network cable attached to the TCC2 (“Ethernet PoE/Ctrl”-Socket) the browser-based ControlCockpit-Interface should detect and identify the TCC2-unit as shown below.

Clicking on the unit to be configured from the device list opens the settings view where system and audio parameters can be examined and edited.

In the leftmost section of the “Audio” pane the current focus of the TCC2’s automatic beam-steering can be tracked in real-time. Via the “Edit” button the user can manually declare vertical and horizontal exclusion zones (marked grey) which will prevent the source detection from being deterred by noise sources at known locations (e.g. ceiling mounted AC-vents, projector fans).

More information can be found in the online user guide.

In order to improve the AEC-performance of the overall conference setup it is advisable to provide the AEC-reference signal (i.e. as being played back by the near-end loudspeakers) to the TCC2’s reference-input-channel (1st Dante input-channel), so the beam-steering can be stabilized during far end speech.

Use the Dante-Controller-Software on a computer attached to the Dante-network to adjust the routing between the respective Dante-endpoints. Proposed procedure to find the right level for the AEC ref signal:

This system deployment makes use of PoE+ powered endpoints. The TesiraCONNECT provides all necessary resources to support these communications.

The laws of physics can't be ignored when deciding on the right placement of a microphone. A good signal-to-noise ratio is key in every part of the audio signal chain and for a typical microphone pickup scenario, this translates to avoiding large distances between the mic and the talker.

Placing speakers in a room can be as equally critical as finding the right spot for a microphone. An ideal positioning of multiple ceiling speakers will achieve an even SPL coverage and a good speech intelligibility across the entire room.

The Desono speaker calcualtor can aid in determining the correct number and proper location in which the ceiling speakers should be located.